As the bride walks down the aisle, the groom gets ready to position him to the right of his would be wife. Vows and rings are exchanged. Finally, the two souls are tied in the pure threads of marriage. But wait, have they ever thought about their position before? Why do grooms always stand to the right of brides? Well, like many other traditions, it has too got its own story. 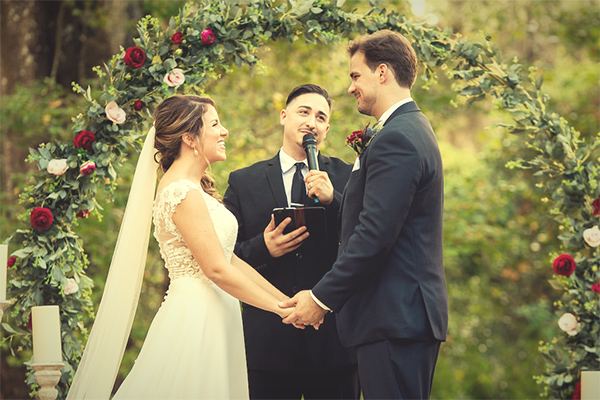 Centuries ago, marriages were not arranged in accordance with the will of the brides or their families. The tradition of “marriage by capture” used to prevail in those times. Many historians have claimed that in European history, the groom used to take the bride by his power. Sometimes it used to happen against her will. Not just that in many cases, he had gone against the will of her family too. So in simple words, grooms used to kidnap their brides at times.

The groom in those times used to be accompanied by his groomsmen. The clan would fight bravely with the uninvited intruders. Also, a swordsman with the best sword skills used to stand by the groom. Always ready with his sword, he used to defend the groom in all circumstances. Despite his armed clan, the groom too had to be well-equipped to face any resistance from his raging in-laws.

Hence, the logic of standing at the right evolved. As most of the souls on this planet are right-handed, therefore the groom used to stand at the right of his bride. This was done to render his right arm free. He could take his sword out at the slightest trace of agitation staged by his in-laws. Gradually, this logic was molded into a tradition that thrives to date.

But Judaism has something else to say. In this religion, the positions of the groom and bride are switched. Here the bride is supposed to stand at the right. Therefore, different religions have different traditions that flourished through their own stories. Similarly, the tradition of donning veils by brides too has its logic. It is widely believed that it used to be done so that the groom did not turn down the marriage if he did not like the bride’s face.

Traditions have evolved and underwent many transformations with changing times. They dwell on the beliefs of the people who constitute the society. So they are not rigid but flexible enough to suit the demand of the prevailing times. For instance, the “marriage by capture” no more exists but the positioning tradition has successfully stood the test of time. They are the thread that binds us to our past and let us cherish the story of our evolution.