Not all of us are born with a silver robe that enables us to save the civilians and neither were we created by Professor Utonium to save our Townsville every single day. However, one Montana granny has come out as a beautiful example of how one doesn’t need any fancy things to do good. All you need is high determination. 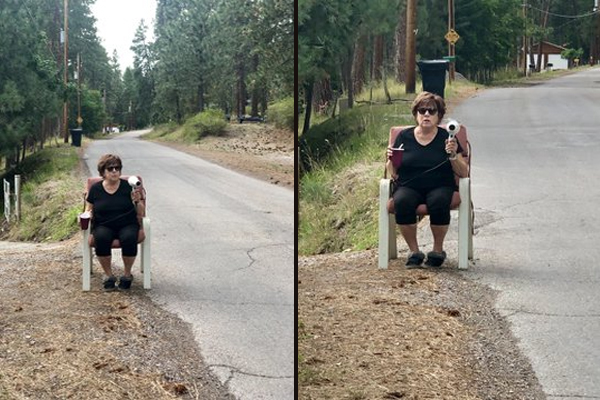 It is okay if you do not live in a big bungalow or have superpowers but instead the simplest of things could actually turn into your weapon. And that is exactly what this woman chose, the everyday articles- a renegade radar gun, a cup of hot coffee, an armchair and a hairdryer.

Yes, that is all Patti Baumgartner needs to combat crime, the sin of unsafe driving. Patti who was exhausted from people driving irresponsibly like they were some sort of daredevils. So she decided to set her boot camp at the very road of South Finley Point located southeast to the Flathead Lake.

Now, we are sure you must be wondering what is so special about this. Well, the whole catch is that she is using her blow dryer as her arm. Yes, you heard that right! Of course, a flash of hot air is not sufficient to stop a racing motor vehicle but its deceptive look can definitely have people thinking. The dryer that she uses resembles a gun used by the team of traffic cops.

In an interview she mentioned that she noticed most cars and bikes would not bother stopping or slowing down at important junctions on the road which caused a lot of trouble to the people living nearby. The whole thing made it impossible for people who drive carefully to take out their vehicles for a ride or for kids to enjoy cycling.

This Lady is helping @TrooperPesola slow drivers down on Finley Point. She’s running radar with her #SoloCup #FinleyPoint #SlowDown pic.twitter.com/zicvdRpCyc

And this is where she intervened and the idea popped in her head. The good part is that the local patrolling team is on board with her as well, while in general Patti could have been jailed for impersonating as an officer.

Noah Pesola, a Montana Highway Patrol Trooper said, “ I thought it was hilarious, I think that we have a speed issue in Montana and I thought it was a great creative idea for the public to try and combat that a little bit without making people too upset.” The officer has even given the old lady an honorary title and mentioned that he couldn’t deny her request since it was a form of community service, which also includes her little grandkids living in the same area and this is how Patti got her trooper badge and hat.

She said that she is going to continue her smart move to fight reckless driving and to keep the kids safe. Truly we are so proud of you granny!