Your pets can surprise you with the most unexpected gestures. They are capable of a lot and there are many stories proving the mischievous side of them. In this case, Pete, an adorable pug revealed his “prankish” nature when he locked his owner out of her own car. He got a lot of attention out of this! 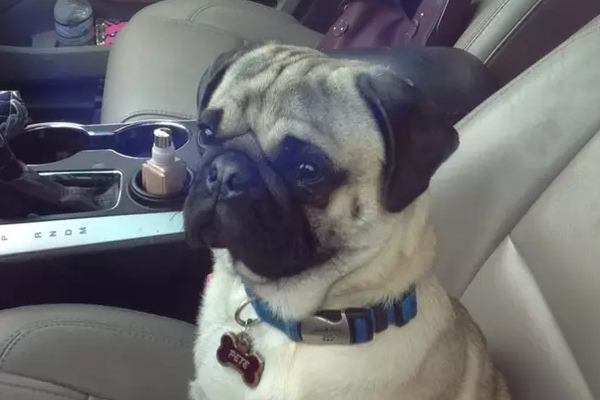 If you have a pet, then you are probably used to their behavior. They can be full of mischief at times. They can be troublesome and test your patience by creating a mess around. But can you ignore those puppy eyes? They have that weapon and we surrender in front of them!

The cute pug, Pete had a really “playful” moment when he got stuck inside a car locking her owner out for almost three hours. Don’t act so surprised as your pet might be plotting something similar for you too. Be alert!

Pete locked the car doors from inside (this pooch is a genius!) and Monica, the dog’s owner felt helpless as she was unable to unlock the car. Even her phone was inside but fortunately, she had her iPad with her. She texted her family for help explaining the entire scene that occurred. The car was right outside her house when this all happened.

This car thief sat inside pretending as if he doesn’t know about the chaos that he created. We have seen those innocent looks before!

Nick Garcia, this woman’s son tweeted the entire situation to let people know about this incident and the mischievous actions of Pete. The woman had to remain patient for three hours as the American Automobile Association took this long to arrive and unlock the car so that she can get inside.

Nick who is a resident of San Antonio, Texas was not at all shocked on hearing about all this as he was confident that such instances would happen with the cute pug around. He shared some adorable pictures of the pooch and the screenshots of the texts sent by his mom asking for help.

His first tweet read, “So my dog locked my mom out of her car.” He added the pictures of that moment with this tweet and the dog is seen sitting inside calmly showing no hint of regret, in fact, makes the most innocent expression.

So my dog locked my mom out of her car pic.twitter.com/mCnNq56wfL

The text exchange showed that the woman was quite nervous and wanted help to reach as soon as possible. She kept emphasizing in her texts that she wants AAA to arrive immediately.

Three hours of waiting and finally, Monica took a sigh of relief. They used their expertise in unlocking the cars and managed to get the dog out. Nick updated everyone about the “rescue operation” and his tweets made many burst out in laughter. He got 95,000 retweets and over 420,000 likes on his post. That is enough to tell that people were amused!

All dog owners nod their heads in agreement when they hear such actions of dogs. The puppy eyes that follow after acting as a “bad boy” have everyone mesmerized too!