Babies are obsessed with gadgets and their fingers can do wonders on these. No matter if your gadget has a touch screen or a keypad, your kids are capable of scrolling them. This particular kid had ordered a couch worth $400 and the mother is shook. 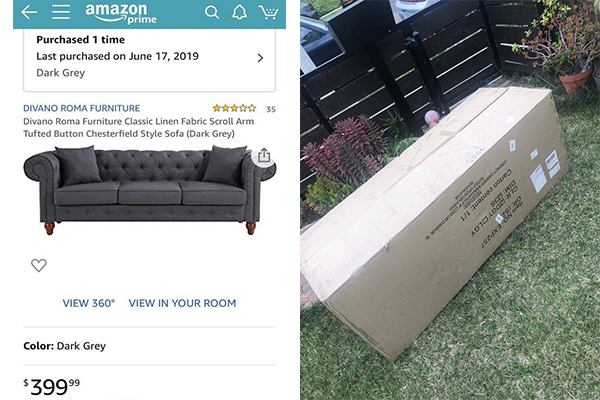 Most kids will snap their unwanted selfies or maybe send them to your office group. It is all about scrolling for them and by chance, they do things that will leave in a dumbfounded state. But what would you do if your toddler has managed to buy a $400 couch through Amazon?

This mother, McNeil was in the same situation and she couldn’t figure out what had actually happened. She said, “I thought, ‘Did I buy a couch in my sleep?’”

It took time for her to realize that it was her daughter who had ordered the couch. She had put together the pieces of the puzzle. She was looking for couches earlier that day the culprit had traced down her history on Amazon.

When the mother got to know about the order, it was too late to cancel it. The 1-click service of Amazon is helpful for people who are always busy and cannot go through different steps. However, this feature turned out to be a disaster for this mom.

If she had canceled the order, she would have been charged $79 for restocking and a $100 in shipping. Hence, she came up with a better solution and decided to sell the couch for $300 and is just hoping that it would go really soon.

This is not something new; many kids have put their parents in a tough spot by placing such orders. Hence, parents should always keep a tab on the activities of their kids. The mother agreed to it and said, “You would think I’d learn not to leave my phone around or put a passcode on it.”

The mother is amused by her daughter’s act like the whole of the internet.